ADU Permit in Los Angeles: How it Works and How Long it Takes

Angelenos love accessory dwelling units, and the city of L.A. is cheering them on. They’ve even streamlined the ADU permitting process! But there’s still a lot of confusion around getting an ADU permit in Los Angeles.

Maybe that’s because there are 88 separate cities within L.A. County, each with its own planning department. And some of these jurisdictions have not yet been able to improve the permitting process like the city of L.A. has.

No wonder homeowners are mystified and sometimes frustrated by permitting. Your designer has submitted plans for a beautiful ADU, you’re dreaming about flooring and paint colors, all you need is for the city to issue those permits . . . and then you wait.

We polled some of our most prolific ADU designers and design/build partners to get an accurate sense of what’s going on in the planning departments across the L.A. region, and to find out how long it will typically take to get your ADU building permit.

Time frame for getting an ADU building permit in Los Angeles

According to our designers, most ADU permits are issued within four to six months. If you live in an unincorporated area of Los Angeles, your jurisdiction is Los Angeles County and your permit will be issued by their public works department.

Florentine Christian is the founder of Sidekick Homes, which has developed ADUs in more than 20 Los Angeles jurisdictions. She reports: “Our fastest ADU approval was just under two months with the city of L.A., and that was because the clearances were minimal for that project.”

By clearances, she means review and approval from departments other than the department of planning itself—for instance, a power utility. Florentine says most ADU projects take about four to six months to get permits, with time frames varying greatly from one jurisdiction to the next. “Our longest was just over a year, but that one was in a coastal zone and required a coastal development permit, complete with public hearing.”

Avi Levi, founder of Levi Construction, has completed more than 180 ADUs in the Los Angeles area. “Permitting is usually going to take five or six months,” he says. “That means we had some minor challenges, nothing too extreme. If we have an easement, an architects’ review board, or a public utility like a power or sanitation company that needs to physically go to the property, immediately you’re looking at nine months.”

How the ADU permitting process works

When your designer has completed your construction drawings, also called a permit set, they’ll submit them to the planning department. A plan check officer will review them. In most cases the plans will go to the building and safety department immediately after the planning department. Building and safety will review them, note any changes your designer will need to make to gain approval, and will then send the plans back to you.

In most jurisdictions, this cycle will be repeated with various other entities, one by one. The number of departments that will need to approve your ADU plans depends on the physical characteristics of your lot and the ADU regulations in your jurisdiction and neighborhood. 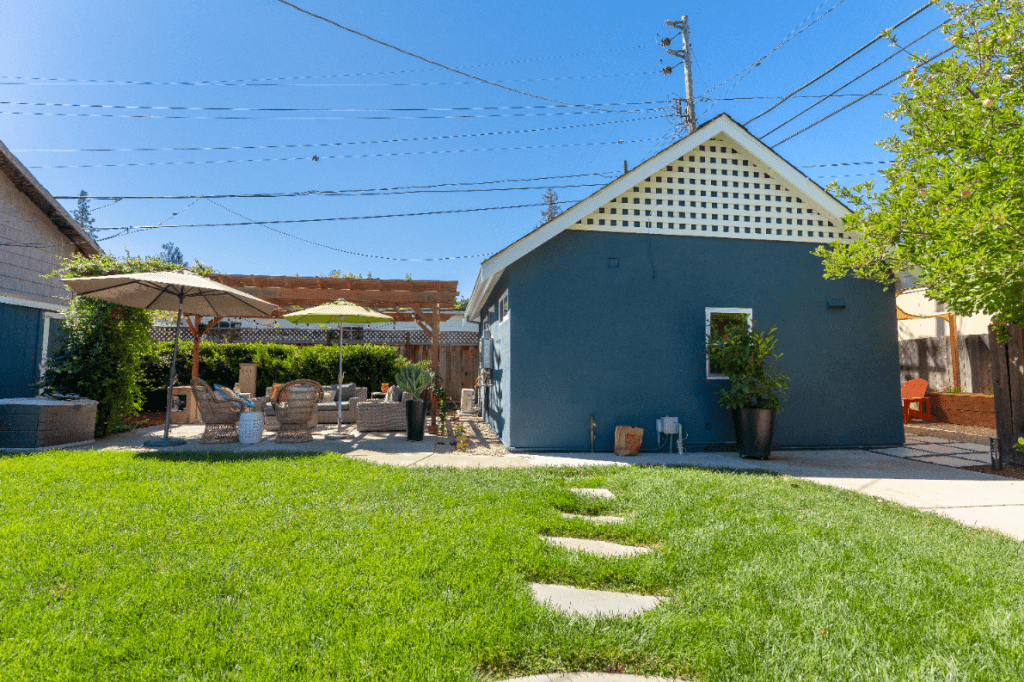 A typical situation with urban lots in Los Angeles is that there are power lines running along the rear or side of the property. The power utility needs access to the lines to maintain them, and the access area is called an easement. If you’re planning to build within that easement, you’ll need a special permit from the power utility.

The same goes for sanitation. If your ADU is larger than 500 feet, a worker from the sanitation department will need to come out to the property and inspect it to approve the plans.

Your ADU may not need any of these clearances, or it may need some that aren’t listed here. And while things like power lines and sloping lots are obvious from the get-go, with other clearances you won’t know you need them until the planning department reviews your plans.

When all the departments have signed off on your plans, you’ll be able to pay for the permits and start building your ADU. The city of Los Angeles requires just as many clearances as any other jurisdiction, but instead of sending the plans to each agency one by one, the L.A. Department of Building and Safety (LADBS) reviews them and consolidates the needed changes at the beginning of the process.

Florentine explains, “We submit to LADBS and within a few weeks we get corrections back, along with a list of all the required clearances. We are then able to work on gaining all the department clearances simultaneously. It creates efficiency and shortens the approval process considerably compared to many other jurisdictions.”

The city of L.A. recently began to receive plans online, which saves more time for designers during the submittal process.

Why can’t I get permits faster?

The number of clearances required by different departments adds to the time it takes to get your plans approved. Unless you live in the city of L.A., getting the clearances will probably be piecemeal as the plans move from department to department.

And like so many other sectors of the economy, there’s a labor shortage in these organizations. The housing crisis and the building boom it triggered has been exacerbated by a generation of older workers who are retiring. Among them are structural engineers, soils engineers, and personnel in many city departments.

Understaffing at the planning department

Which brings us to the biggest reason for longer-than-ideal wait times for some building permits: across the state, city planning offices are understaffed, and many of the plan check officers are relatively new at the job.

Another twist: new ADU regulations went into effect in 2020, which is when ADU construction soared. Many plan checkers, overwhelmed with the onslaught of ADU permit requests, haven’t had time to learn all the nuances of state laws and local ADU ordinances.

It would have been a heavy lift even without the Covid pandemic, which made the personnel situation more challenging. Some planning departments are even outsourcing their services to private firms.

Considering all that, four to six months isn’t so unreasonable! Architectural designer Lyle Boatman currently has ADU projects in six Los Angeles jurisdictions. He’s found a wide range of experience among architects at the planning departments. Lack of coordination among staffers at some departments has been a challenge.

“But the city of Long Beach seems easy to work with and digitally savvy,” he offers.

Florentine sees a light at the end of the tunnel: “We have found the local planning departments to be quite open to suggestions on how to improve overall approval processing time for ADU building application submissions,” she says.

Meanwhile there’s no point getting angry at the plan checkers. Your best bet is to hire an experienced ADU designer who can create airtight plans and, if necessary, diplomatically educate plan checkers who aren’t fully knowledgeable about ADU regulations.

But the law says ADUs have to be approved within 60 days!

The 2020 ADU law does say that. But if a planning department doesn’t have enough trained staff, they can’t meet the 60-day deadline. In theory you can try to bring legal action against the department, but by the time you see any results, the ADU permit will probably have been issued.

Avi Levi begins his conversations with prospective ADU homeowners by putting the process in perspective: “An ADU is a new housing development. It’s not like a garage remodel.” Building an ADU is much more complicated than something like a room addition or kitchen renovation.

You’re building a small home, and that may take some time. The same is true of custom-built primary dwellings. “Permits for large homes usually take at least a year to make it through the city planning department,” says Avi. Luckily, most ADU permits don’t take that long! 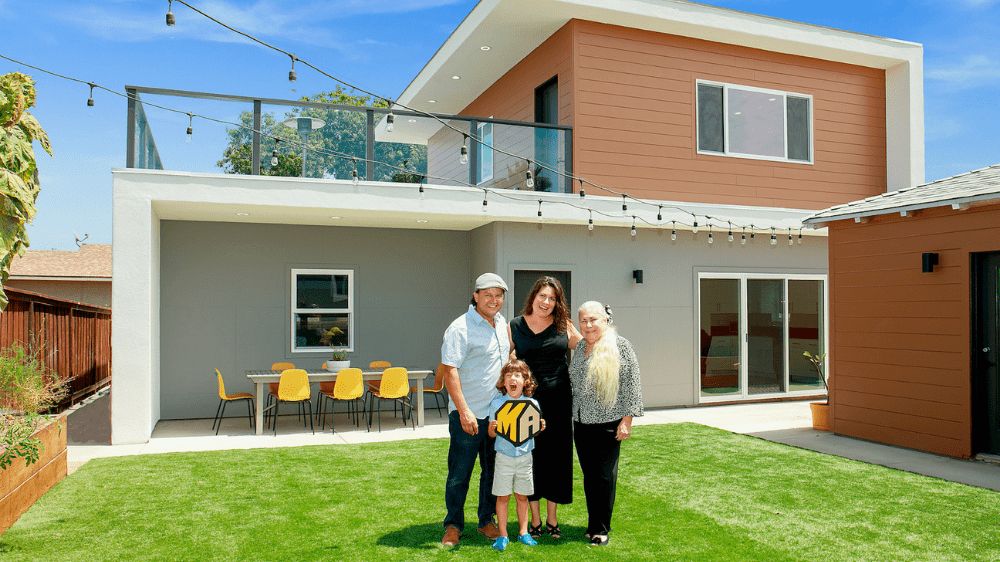 Like your primary dwelling, an ADU might be around for 100 years or more. It can generate income for decades, or save a family member decades’ worth of rent. And over all those years, it will be increasing the resale value of your property.

So when you’re planning your ADU, keep your eye on the prize!

We’re committed to giving you the support you need to make smart decisions about building an ADU. After consulting with thousands of homeowners and helping more than 300 of them complete ADUs, we’re more excited than ever about accessory dwelling units!

Times change, but everyone needs housing. If you’re wondering how to build your own ADU, reach out for an ADU planning phone call. We’re happy to share our experience and connect you to designers and general contractors with proven experience in your region.

Maybe it’s time to expand your property and your possibilities with an ADU!